Staff member
Wizard of Adventure
Beta-Tester
Faster Combatant
Adventure Builder
Gamer Lifestyle
Adventure Master
The upcoming Season One is my proof-of-concept. At this time, I want to invite German-speaking players, at least for the first few sessions. After testing and tweaking, I want to open this up to all English-speaking patrons comfortable with gaming in European time zones.

Q&A:
Map of the Borderland 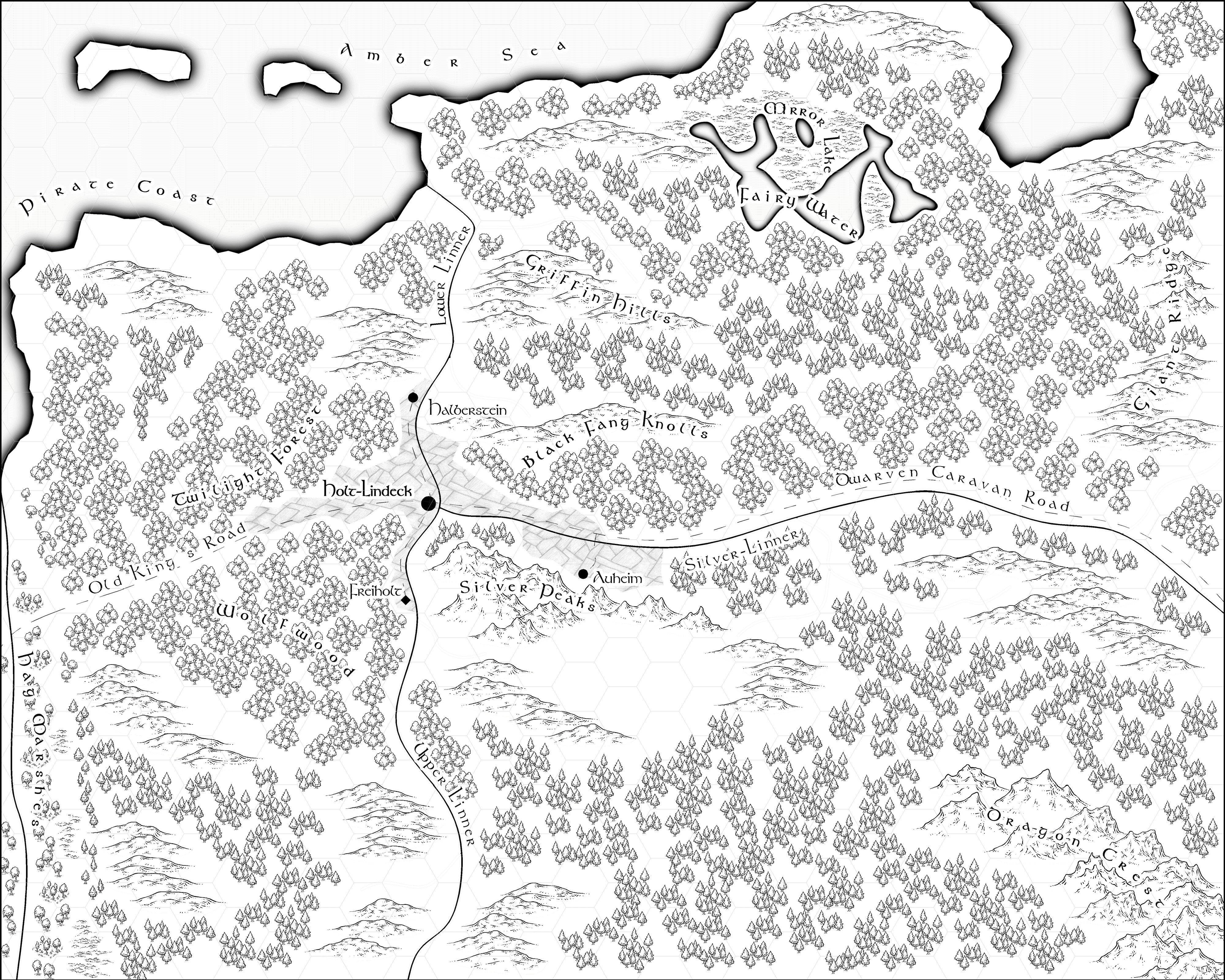 Staff member
Wizard of Adventure
Faster Combatant
Adventure Builder
Adventure Master
I would like to play and test your borderland game!

Staff member
Wizard of Adventure
Faster Combatant
Adventure Builder
Adventure Master
I just read your West Marches description in English and German (which are indeed a little bit different), followed your link of What defines a West Marches Campaign, and followed up by reading all the great articles from Ben Robbins about West Marches. This was a treasure of knowledge!

A long Shadowrun campaign of mine, which I had named Redmond Runners by the way, had many West Marches style elements (although I didn't know about it then). Then again, some "must haves" were different in my games. Some weeks in and I experiencing a strange irritation about what we had created. I tried to get my mind around it, but failed. I couldn't name, what it was and didn't know that I had mixed styles!

West Marches style elements:
I had a big pool of players, many with more than one character, changing groups, many pre-defined areas of gradually increasing danger, stringent history of places, I was interested in every PC, there usually was a rift of level between PCs, in-between summaries, as well as newsflashs and interviews.

Non-West Marches style elements:
But it was mostly designed as an urban setting, I had always adventures and plots planned, I tweaked them for the attending PCs and player preferences, I co-created all PCs, there were many, many NPCs that made a difference, I needed to announce when sessions were going to be played (my players were just incompetent to coordinate themselves).

Social Trouble:
Due to the West Marches style influence without announcing it as such (because I didn't know), we had A LOT of social trouble:
For example, player A didn't want to play with player B, playing styles would vary drastically so that cliques evolved, some players tried to bribe me, some players just felt like they had been left behind, others would frantically beg for another session, some would request "a normal group" instead, and so on,

This is just a warning to keep in mind, like Ben Robbins also pointed out.


So, back to your game, Jochen.

In your English articles you described how your decided on the specific genre of fantasy. Do you have sources here you could share?

Stephan Hornick said:
In your English articles you described how your decided on the specific genre of fantasy. Do you have sources here you could share?
Click to expand...

I used GURPS Fantasy. It has a nice introduction to the genre and many cool ideas. It is more of a meta-book, though. The genre descriptions are part of the publisher preview: https://www.drivethrurpg.com/download_preview.php?pid=224851

Stephan Hornick said:
Also, would you mind to post some pre-game rumors about the areas surrounding the home town? That way, we may soon decide on our first exploration.
Click to expand...

I seem to not have read to the end of your English introduction. There are your first bits of information all right.

At once I would be intrigued to investigate who owns the gold mines at the moment and what lies beyond.

Stephan Hornick said:
Do we introduce our PCs here? I suggest we do.
Click to expand...


Stephan Hornick said:
I would also suggest to share information here, but not as Ben Robbins suggests like a metagame, but rather in an in-game fashion, i.e. writing nice texts to which other PCs can react and thus create something like an ingame discussion of people (PCs) in that tavern... What do you think?
Click to expand...

You are definitely welcome to do this in-character here. I will summarize changes on a more meta-game level in a stream and keep the world up to date.
I like the idea of tavern talk!


Stephan Hornick said:
Further, do you want a tavern for gossip like Ben described?
Click to expand...

I could imagine that being a separate thread. This one for planning and coordination (real world and meta). The other one for in-game/in-character talk (and action).

I would prefer that you run your îdeas by me in private to gauge the impact on the game and give feedback before you post it for all to read.


Stephan Hornick said:
Also, would you mind to post some pre-game rumors about the areas surrounding the home town? That way, we may soon decide on our first exploration.
Click to expand...

I already prepared stuff that I will post soon, and I expand on it while we speak.


Stephan Hornick said:
When we collect the party and set an (outgame) date for the adventure, I guess you can always declare bad weather or other event, that prevents the party from departure, in case you as a GM are not available, right?
Click to expand...

Sure. What are you aiming for? Keeping the in-game thread plausible? I have the feeling I missed something when reading your question.

JochenL said:
I could imagine that being a separate thread. This one for planning and coordination (real world and meta). The other one for in-game/in-character talk (and action).
Click to expand...

Yeah, I figured. Please create it. I would also suggest to write the intros there.

JochenL said:
I would prefer that you run your îdeas by me in private to gauge the impact on the game and give feedback before you post it for all to read.
Click to expand...

JochenL said:
Sure. What are you aiming for? Keeping the in-game thread plausible? I have the feeling I missed something when reading your question.
Click to expand...

Exactly. Just a way for you to say, no I can‘t at that day and ingame reasons why specific groups did plan to go, but then couldn‘t after all. Besides, it seems like a nice additional tool for you to introduce seeds. Weather maybe standard, but an averted goblin attack on the city, a localized earthquake and resulting accident at the gates, the closing of the city gates due to the suspicion of a plague brought to the city by a traveller, etc. may be nice new story seeds thd PCs may pick up to investigate. Only important factor: it has to come from outside.


JochenL said:
My English is not good enough to game by! I can only offer games in German and English. Please add whether you would prefer an English or German game and whether you can or cannot do it in one of the other languages. That way, players know when to join or not.
Click to expand...

Staff member
Wizard of Adventure
Beta-Tester
Faster Combatant
Adventure Builder
Gamer Lifestyle
Adventure Master
Besides of the rumors in the in-character thread, there are also these: https://heldenhaufen.de/Grenzland-Kampagne/Cards/Borderland-Locations.pdf (based on https://www.roleplayingtips.com/adv...tarting-a-west-marches-campaign-step-by-step/)

What about next Thursday, April 8 starting at 7 pm CET (i.e. UTC+2 as we started daylight savings time last weekend)?

Beta-Tester
Faster Combatant
Adventure Builder
Adventure Master
Hi guys, I'm going to play a "cat folk" character but I don't like it that they see themselves as cat-boys and -girls. Thus, I'd like to give that race some lore. Is anyone else thinking or decided about playing a cat folk char, and want to help me come up with something? Just hit me up via DM and we can figure something out. Would that be okay for you, @JochenL? And you have more you want for them already besides roaming the "Golden South"? (I would just drag you into any upcoming conversation if you're fine with that.)
Last edited: Apr 2, 2021

Staff member
Wizard of Adventure
Faster Combatant
Adventure Builder
Adventure Master
Will you just come fron the south or have you been in the borderland longer? Or have you joined some kind of travelling group?

Beta-Tester
Faster Combatant
Adventure Builder
Adventure Master
I have a backstory at hand, and it will include my recent arrival in the borderlands with one of the frequent tobacco caravans run by cat folk. Are you aiming at anything specific, Stephan?
You must log in or register to reply here.
Share:
Email Link
Top