Think too small and think too big.

We've got a critter making a nest under our deck. We can't see it because it's found a good crack to inhabit. But we can hear it. It's chewing something. Leaves maybe. Paper perhaps. The bones of some poor victim, most likely. Or it could merely be a cat that confiscates dice. 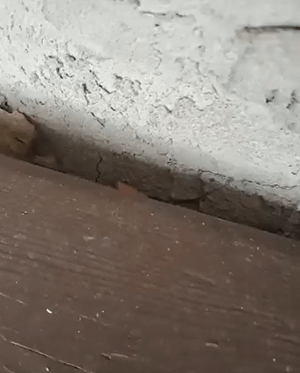 The tiny dire creature's lair​
But as we bear every last inch of modern moon-technology to summon this dire beast from its lair to teleport it to a different land where its folk party down all day, it's reminding me of how the small stuff could ruin a character's day.

Too often we get tunnel vision and make our weakest foes whatever the monster guide says. But a well-placed fire ant hill, a family of curious yet cunning rats, or a persistent swarm of mosquitoes could drive a party of heroes back to the tavern for stiff drinks.

Likewise, when contemplating our worlds, we fall into the GM trap of realism, which inevitably shrinks our thinking and results in logical but uninspired ideas.

Instead, for villain plans, campaign ideas, or even the scope and impact of your setting's history, we should think infinitely. We should think as big as possible and silence the inner critic screaming "that's not possible!" at us. Better to have an idea too big and hammer it into shape than to limit imagination and only ever have small ideas.

Thanks little demon under the deck for reminding me to have more fun by thinking bigger and smaller.

Speaking of world-building, today I have a tip for you that's been in my brain for ages. I've hinted at this in the past, but never really explained my thinking on how to use our campaign setting to craft awesome puzzles.

So today, at last, I share how we can use our worlds for gameplay in a way you might not have thought about before. Let's begin!

My Secret Ingredient For Making Great Puzzles
Why Have a World For Your Game?

In a monster building course I've just started filming for Platinum Wizards of Adventure, I put this in one lesson and promised to unpack it later:

Your Setting serves as one or more dimensions in your puzzles.
Click to expand...

Here's the screenshot for a bit more context: 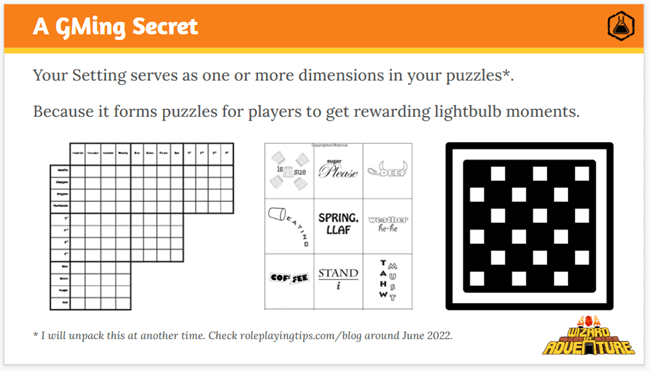 So you know those dungeon puzzles we love?

And Room II: Roleplay or Puzzle?

And our quest for great dilemmas to challenge players?

I'm basically saying that puzzles are the main reason I love world building because our settings can serve up material answers to all those questions.

So today let's dive into this further and please allow me to explain what I mean by:

Boon I: A Stage

"All the world's a stage, and all the men and women merely players: they have their exits and their entrances; and one man in his time plays many parts, his acts being seven ages."

Our setting gives us a platform for our campaigns. A firmament. Good stories have a location. And our world gives us thousands.


Boon II: Detail
Is it red or blue? Bigger than a d30? How close are the PCs with it to Mount Doom?

For example, Duskfall is my sword & sorcery homebrew world where Conan meets Greyhawk. It's got spikes of high fantasy. Every corner, alley, and shadow threaten. And it cradles wealth beyond an emperor's wildest dreams deep within its warrens.

From that we can surmise all kinds of detail like what kind of game systems it might be suitable for, what might be on equipment lists, and what kinds of stories gameplay might tell in this place.


Boon III: Puzzles
Topping my list of world building boons, we use our setting's details to fabricate great logistic, plot, and encounter puzzles.

GM: "By your fluttering candle, you gently unravel the delicate scroll. Scrawled in collassai are runes that read:

"The vile eyebeast guards its fire. A giant of storms clutches the air. Into Malgordia's goblet he does conspire. So that Gorgamol may ascend his eternal stair.'

"So based on those clues and using logic and deduction, guys, how tall is that gnome at the Shady Inn?"
Click to expand...

Those clues don't have to land out of thin air. Malgordia is a known villain. The giants sent two storms across the party's path already. And while the PCs don't know much about eyebeasts, three sages in Duskfall know where the creatures prefer to lair and what legends say about them.


Plot Puzzles
The above is a good example. Prophecies, clues to gather up seven parts of a rod, and any problem that imposes story structure. If we take a step back and think about it for a moment, every monster, culture, bit of lore, and Lego piece in your setting is grist for the subject matter of your puzzles.

This is why I think puzzles are the best reason to have a world and build one ourselves. Puzzles are inherently fun for many players. And skinning the puzzle to our setting makes our adventures feel wondrous indeed!


Encounter Puzzles
It's time to rub our hands together and cackle with glee, as we bring in traps and heavy artillery.

Worlds give us a way to explain the existence of traps and hazards we place into encounters as cool challenges. Think of it like "lore for dangers" or backstories for traps, heh. We're tying our setting, game mechanics, and story together. A grand unification.

But when we use our world to tie the room together, we get magic. We answer questions like:

For example, if you give the grimlings blood after midnight they become cursed and rampage. The dungeon has no sense of time. And so a poorly-timed successful bite on a tasty player character turns a romp into a near TPK.

This constraint that our world has placed in awesome fashion into the PCs' path now presents our players interesting choices. And I think that is a high compliment to any GM technique.


Roll Your Own
I cherish the Greyhawk, Forgotten Realms, Planescape, and other setting books on my shelf.

But I have to say, the satisfaction I get from cooking delicious puzzles using juicy ingredients from a world I carefully gardened gives me tremendous satisfaction.

That's my answer to, "Why have a world?" World-based puzzles make GMing more fun at every game!

For one, I love "bigger and smaller"! I like to use weak, small opponents for tremendous effect. Not always becoming more powerful, but I like to find their options, their reasons to live, the reasons they have survived so long, their possible effect on players in the right scene.
Thus said, there are sometimes marvelous evenings in which I portrayed e.g. ratmen or a solo minotaur exactly right and the evening was an experience players and me will never forget. It's not about power. It is about portrayal, understanding these creatures, and tone, I believe.

"Bigger"
Looking for weather generators I lately found this cool site:
https://donjon.bin.sh/d20/weather/
While the weather generator itself was not what I was looking for, it shocked me that I had never even thought about supernatural weather. I will definitely use this in my current campaign. After all, I HAVE an auspicious day each month. Why not use it exactly for this?! How cool is inverted rain for example??!

And I love to demolish my campaign map. Major events should not only be in the past, but right under the PCs' noses, I think. After all, it should be a fantastic adventure, right?


And secondary, I love my world building for exactly this: Exploration. Which is another way of saying puzzle.
Having figured out thousands of years back in some notes and ideas, I put my PCs onto the path of discovery. They walk ancient dwarven roads, find ruins of druids from elven times, each magical artifact has its history, its former owners, its rumors and strange powers. The orc wars are not over yet. They have still influence on the current time. And sometimes, only understanding the past can the PCs change the future. But most importantly, the players are discovering bits and pieces for themselves and they are intrigued. And I am not talking endlessly about them.
You must log in or register to reply here.
Share:
Email Share Link
Top