Staff member
Platinum WoA
Wizard of Story
Wizard of Combat
Gamer Lifestyle
Borderland Explorer
I am currently working on a support ticket and had the chance to glimpse a user's color scheme and category names. I liked what I saw and thought that this would be great for sharing!

So, which color do you use for which tag category?
What names did you give to your tag categories?

Gold WoA
Wizard of Story
Sometimes I translated the default names to Italian. In other cases I changed the names for specific needs
Minuses -> Mastering/resources i.e. links to external pages
&Free -> Facts and Truths i.e. Plots that are revealed and now have become "Facts"
+Pluses -> Fronts like in Dungeon World
Sections -> Scenes

I've never had the need to use $Valuables so far

Would it be of any help to define your own categories in addition to the default ones?
Like specifying a "leading character" not used yet e.g. "|" and its name/color and having the system use it? 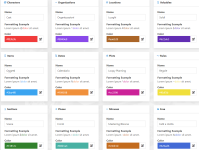 Gold WoA
I didn’t change the colors for a long time since I’m perfectly happy with all orange. However, since the option is there, I figured I’d have some fun with it.

Here are the name and color changes I went with:

@ Dramatis Personae
I wanted to choose a red hue to indicate my cast of characters since it’s a bold color and it would remind me that they’re the most important thing in the game. I went with Blood Red (880808) since they’re (mostly) living creatures driven by passions.

^ Organizations
I almost used this color for Plots and Themes, but Byzantium (702963) seemed a good fit for hierarchies, bureaucracies, churches and secret societies.

# Gazeteer
I go back and forth over whether I should name this one Worldbuilding since it doesn’t only cover nations, settlements and cultures, but all of this stuff is worldbuilding, so Gazeteer it is. Forest Green (228B22) was a natural choice for describing the land.

$ Treasures
This was an easy choice, but the difficult part was finding a gold hue that wouldn’t be too pale or hard to read. Golden Yellow (FFC000) seems a fair choice for now.

% Calendar and Chronicles
I added “Chronicles” to remind myself I could include historical events in this category as well as dates and holidays. Sunset Orange (FA5F55) fit the theme of time and recording the past in my head.

* Plots and Themes
On a few of the play-by-post fora I used to use, orange was the color of out-of-game statements. So I decided to keep all of my OOG notes in that spectrum. Bronze (CD7F32) was a solid choice for Plotting, since you have to beat it into shape.

(Also, Charcoal (“it’s a rough sketch”) and Midnight Blue (“burning the midnight oil”) were too dull to stand out from the rest of the text as a visible link.)

~ Rules and References
In keeping with the Orange = OOG philosophy, Safety Orange (FF5F15) was the most natural fit thematically for the Referee’s information.

+ Magical Artefacts
I might rename this one Arcana or something similar to include more magical stuff, but I usually reserve spells and schools of magic for Rules. Anyway, for magic items, I thought of the Discworld book The Colour of Magic which establishes magic’s color is “octarine,” a color that doesn’t exist in our known spectrum. But I always thought of it as kind of a Violet (7F00FF) color because my brain has its limitations.

- Argot
I use this category for slang, languages, lingos, and terminology the denizens of my game world use themselves. Going with the notion of “purple prose,” I chose Purple (800080).

& Ephemera
As a catch-all category, I thought of “pulled it from the blue sky” or daydreaming, but Sky Blue was too pale, so I went with Bright Blue (0096FF). I usually end up dropping laws and landmark legal decisions that affect the PCs’ lives into this category, as well as esoteric subjects that don’t fit as neatly under Gazeteer (like the cosmic concepts of Law and Chaos).
Last edited: Apr 10, 2022 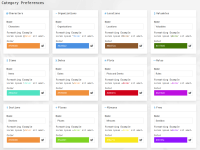 Gold WoA
Out of curiosity, @ExileInParadise , what do you use Sections, Pluses, Minuses and Free for? I'm intrigued by your use of "Sandbox" here.

mysterycycle said:
Out of curiosity, @ExileInParadise , what do you use Sections, Pluses, Minuses and Free for? I'm intrigued by your use of "Sandbox" here.
Click to expand...

Plusses and Minuses are more for logs than pages so I can keep track of "conditions in effect" that need to be remembered across sessions.

Sections are System/Setting/Story divisions - like story Arcs which are thhings I want to remember that span multiple adventures or Milestones if you use that sort of XP system.

&Sandbox is my renamed "Free" which I use as a dumping ground for templates and things to make logs and pages out of - DM tools mostly.
Empty 3-line NPC template or faction Metacharacter template are examples of what I keep in sandbox.
The filled out ones become entries with their own correct tag and labels specific to what they are.

In the GM parts of pages I may also link to the sandbox template for making more of the thing I am looking at.
One I just added to a different campaign that I need to add to all of them is &Labelling so I can index all of my Labels in one place as a jump page.
You must log in or register to reply here.
Share:
Email Share Link
Top